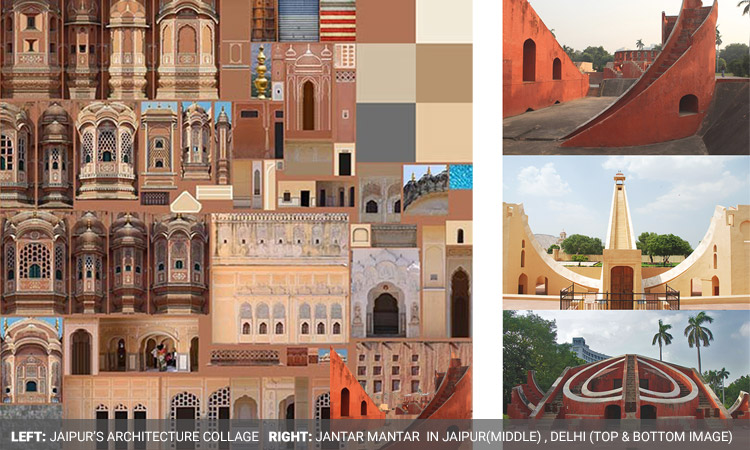 Often revered as THE PINK CITY , the capital of Rajasthan – Jaipur has a timeless Architecture , result of juxta positioning various overlays of historic timelines, each event adding to the city’s present grandeur. Famous for it’s Prastara urban planning based on Vaastu shastra, Jaipur has an iconic Landmark which can also be found in various parts of INDIA, the JANTAR MANTAR – Delhi, Jaipur (largest), Udaipur, Ujjain, Varanasi. JAI SINGH II constructed five astronomical observatories in his native territory of west-central India. Passionately interested in mathematics and astronomy, Jai Singh adapted and added to the designs of earlier sight-based observatories to create an architecture for astronomical measurement that is unsurpassed.

Jai Singh was influenced primarily by the Islamic school of astronomy and had studied the work of the great astronomers of this tradition. Early Greek and Persian observatories contained elements that Jai Singh incorporated into his designs, but the instruments of the Jantar Mantar, as Jai Singh’s observatories have come to be known, are more complex, or at a much greater scale than any that had come before, and in certain instances, are completely unique in design and function.

The primary object of a Samrat is to indicate the apparent solar time or local time of a place. On a clear day, as the sun journeys from east to west, the shadow of the Samrat gnomon sweeps the quadrant scales below from one end to the other. At a given moment, the time is indicated by the shadow’s edge on a quadrant scale. 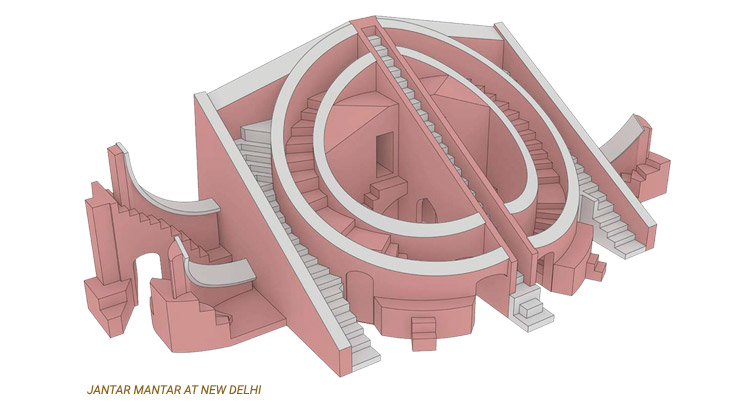 For the Entrance design concept of a Prastara influenced Township design @ Rajasthan-Delhi border, the firm elaborately researches on various aspects of the landmark – the colour scheme, materials, textures, profile, rhythm, scale, massing, proportions and contrast. Due to it’s location on Jaipur- Delhi border, the elements of both Jantar Mantars have been incorporated homogeneously.

Amalgamating the features of Jantar Mantar of Delhi & Jaipur and re-interpreting it’s elements in modern style, gives birth to a unique vibrant colour scheme to the project of complementary yellows, reds & whites as well as symbolizes as a gateway of the future, proudly representing it’s past & regionality with all it’s glory. The proposed model generates a sense of footprint identical to Jantar Mantar. The curvature  & central spire mimics the ratios of the one at Jaipur, rising to about 73 ft. & having the ratio 1:4.28 of length to height.

The stepped landscaping elements have been created alongside the curve to create an essence of entrance through a nature’s gateway, providing a refreshing experience to the travellers.

Separate entrances for the vehicular & pedestrian movement creates a central Landscaping zone with waterscapes, providing the necessary bifurcation & segregation of the traffic about the central node.

Providing a minimum height of 6MTRS. for Vehicular Movement gates, the actual height of the curved feature reaches to about 15mtrs. (5 floors) & the central element to about 18 metres. (6floors), making it’s length about 77 metres., not feasible economically as well as on the present site areas. 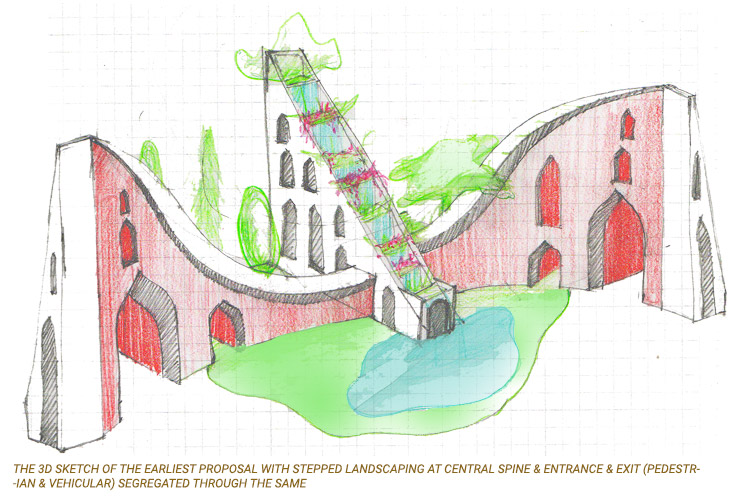 The entrance Gateway narrows down towards the middle, creating a huge void on both sides of central spire, breaking the gradual transition of the elements & reducing the grandeur of the entrance. The gateway lacks a binding element which homogeneously connects all the different elements of the gateway. The arches from the Jaipur Architectural style have ben adopted to complement the contextuality of the design. The Double Helix Structure inspired from Jantar Mantar, Delhi provides a complementary connecting element, providing grandeur to the gateway, at the same time, deviating & providing relief from the bulkiness of the facade.

The Double Helix Structure is the Modernist interpretation of the regional Sun dial, incorporated as a space- frame structure built of Steel & supported by 4 columns. The double- helix crowns the entrance, completing the facade in every sense.

GOLDEN RATIO:: Adhering to the nature’s principles of symmetry, rhythm, proportions & ratios, the Gateway design features some striking features in adherence to this Spiral Watermark (Golden spiral),which is the basis of existance of life on this planet. The Entry openings, the rhythmic increase in profile & parallel references, all combine to highlight the presence of the Gateway design.

The profile narrows downowards the centre, highlighting the Central Spire & suppporting the space frame. The rhythmic increase in the gate sizes from Pedestrian entry to Vehicular Entry is continued forward by the use of planters having a complementary profile, acting as a frame for the Gateway. The boundary design having similar profiles stacked & off-centred from one another, have circular boards for sports- related advertisements of this Sports Theemed Township. Compared to the above profile of Rhythmic increase from the central spire, this profile Follows a reverse curvature of Rhyhmic Reduction from the Central spire. This creates a large central entrance for Vehicular movement, highlighting the grandeur of the entry & gradually reducing in scale as one moves towards the Boundary walls. The framinf planters provides a much necessary Vision Frames so tha highlight is maintained still on the entrance & Boundary wals having same details as the above profile. The gate design has a profile parallel to the space frame in Elevation, highlighting it’s presence & consists of 3 divisions: Fixed members, 2 Way Open Main Gate & a gate for Pedestrian movement.

Complementing the Entrance gateway features & their Rhythmic reduction in size, the Boundary wall design plays with the curves & heights, generating a sense of playfulness & randomness, at the same time, not being over-detailed to hide the highlighted entrance. 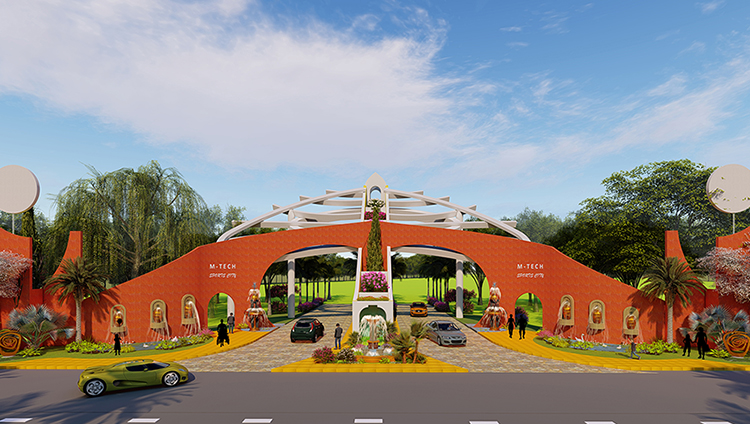 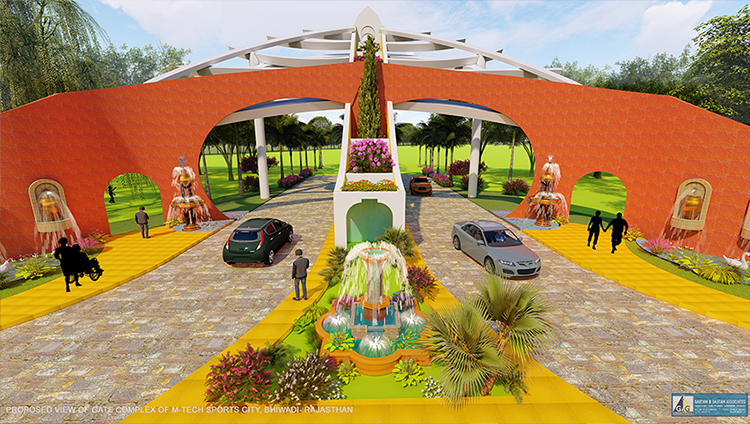 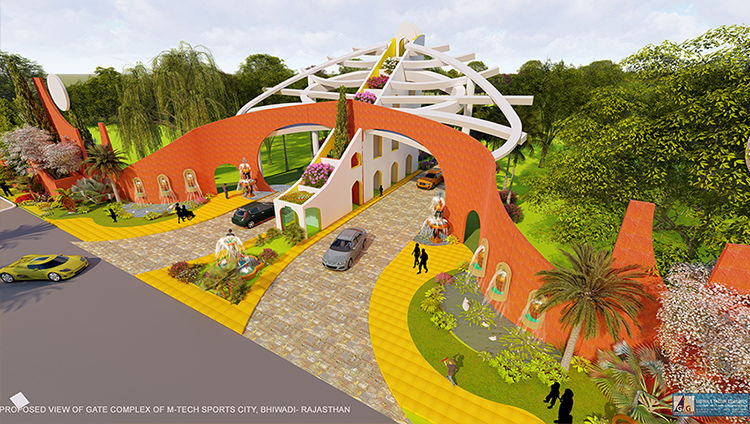 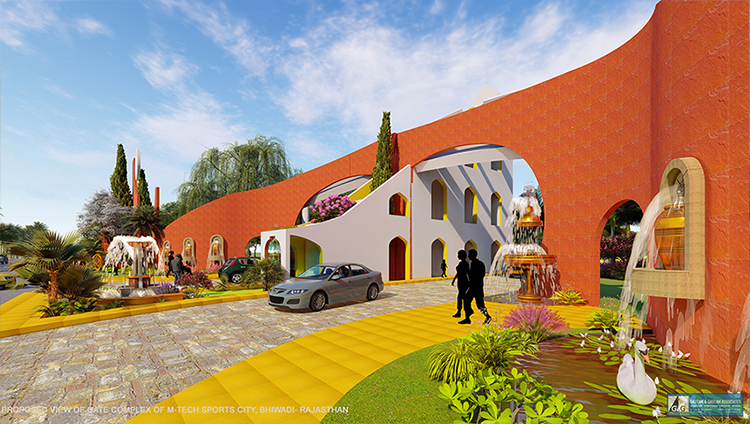 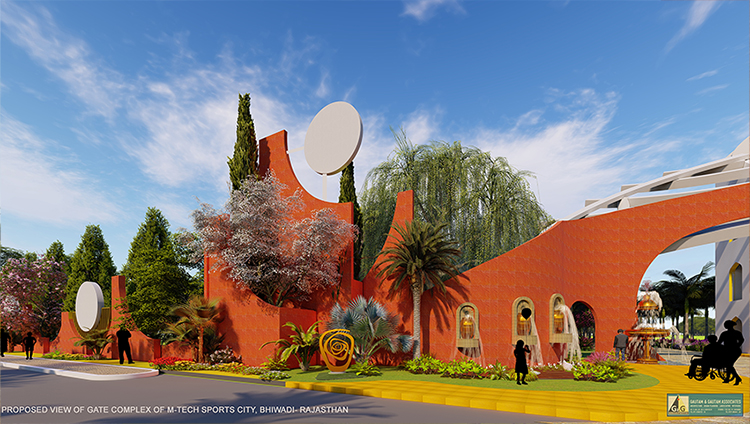