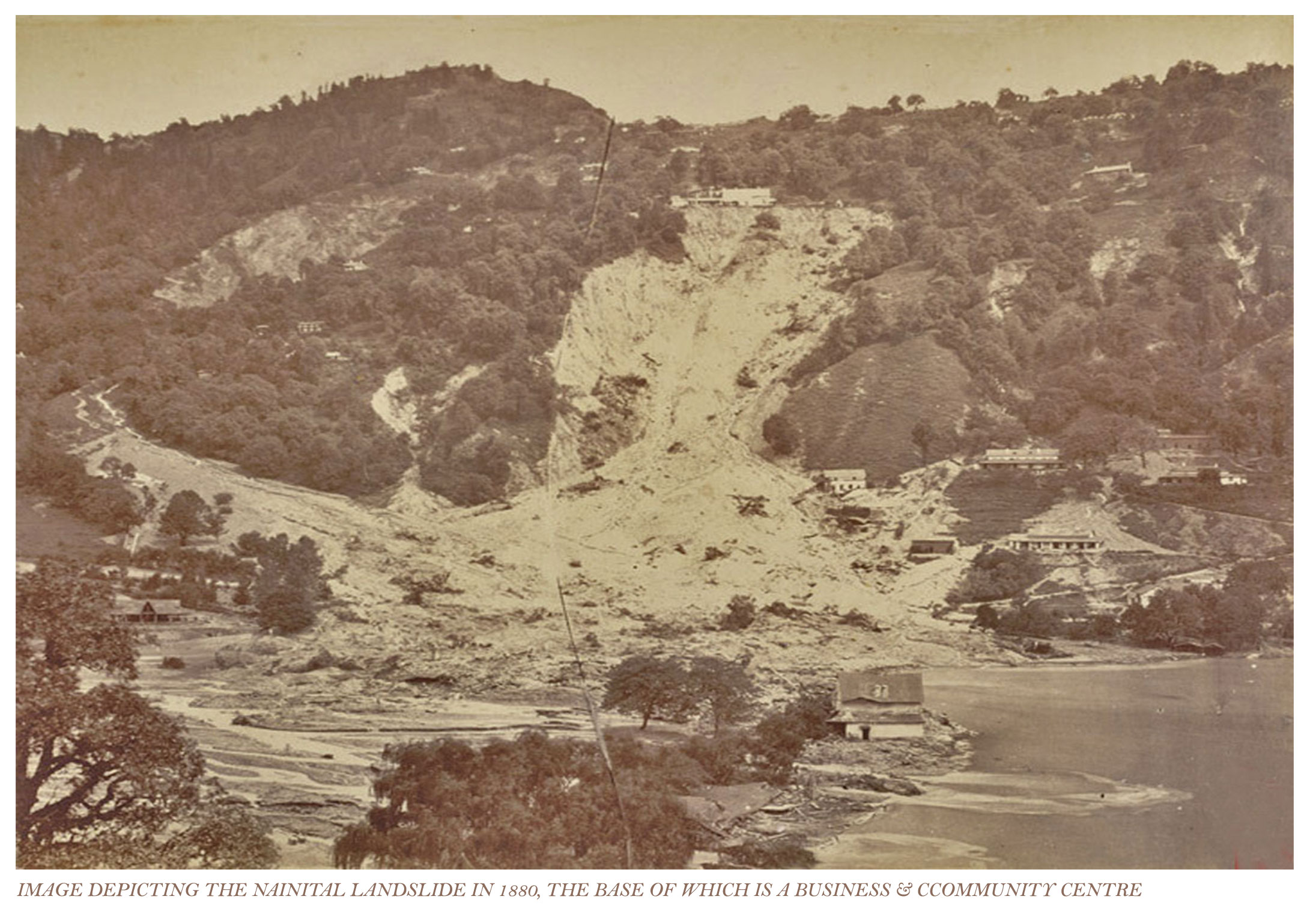 A CASE STUDY OF LANDSLIDES- A NATURAL DISASTER, IN CONTEXT TO NAINITAL

Landslides are simply defined as down slope movement of rock, debris and/ or earth under the influence of gravity. This sudden movement of material causes extensive damage to life, economy and environment. It is the most common and universally accepted collective term for most slope
movements of the massive nature. The term has sometimes been considered unsuitable as the active part of the word denotes sliding, whereas it connotes even movements without sliding like fall, topple, flow etc. It is important to distinguish among the different types of landslides to be able
to understand how to deal with each of them. The ways to identify and mitigate different types of landslides are often different. 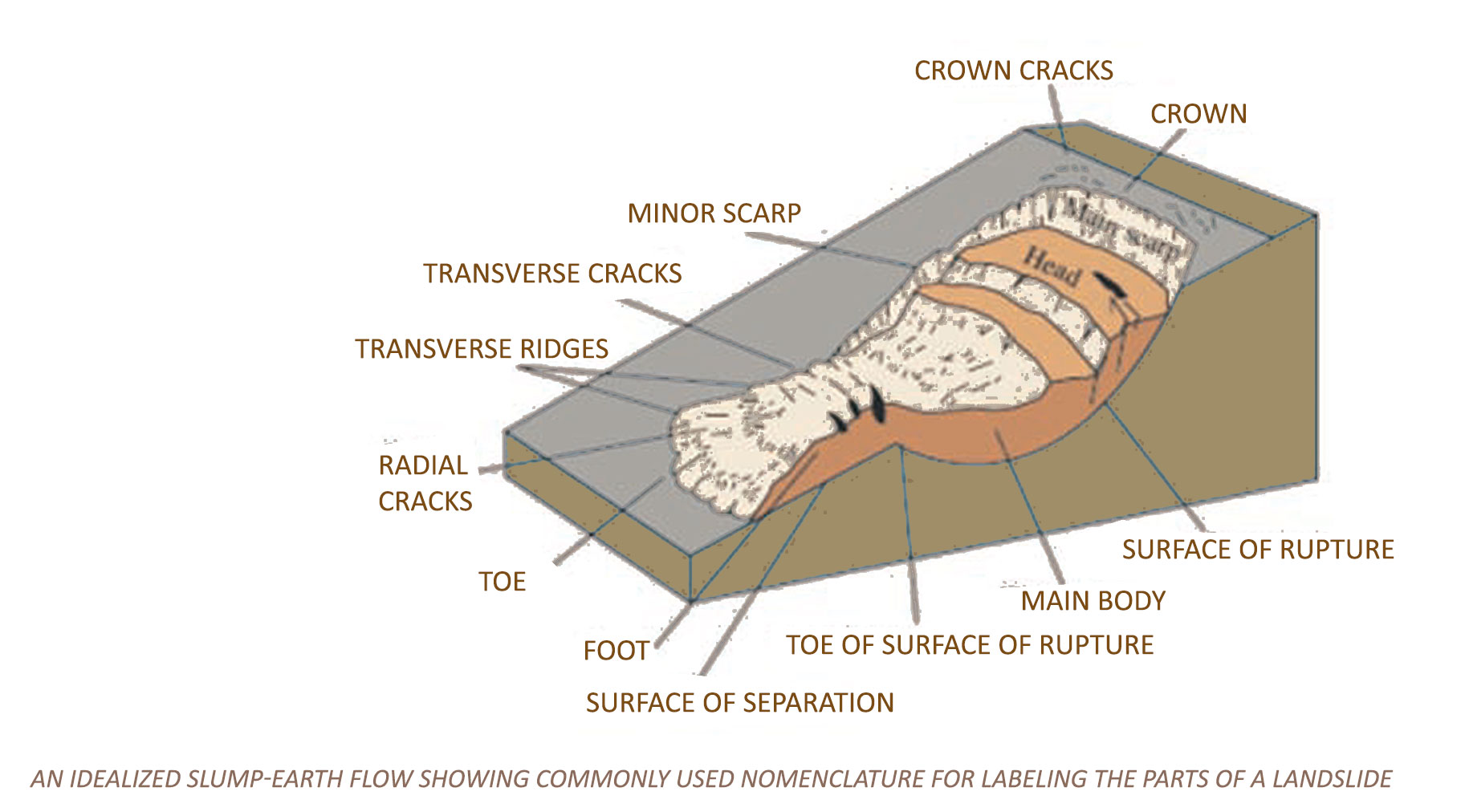 1. Landslide types based on process of failure

FALL is a very rapid to extremely rapid movement which starts with detachment of material from steep slopes such as cliffs, along a surface on which little or no shear displacement takes place. Thematerial then descends through the air by free falling, bouncing or rolling onto the slopes below.

• The detachment of soil or rock from a steep slope along a surface on which little or no shear displacement takes place.
• Movement very rapid to extremely rapid.
• Free fall if slope angle exceeds 76 degrees and rolling at or below 45 degrees. 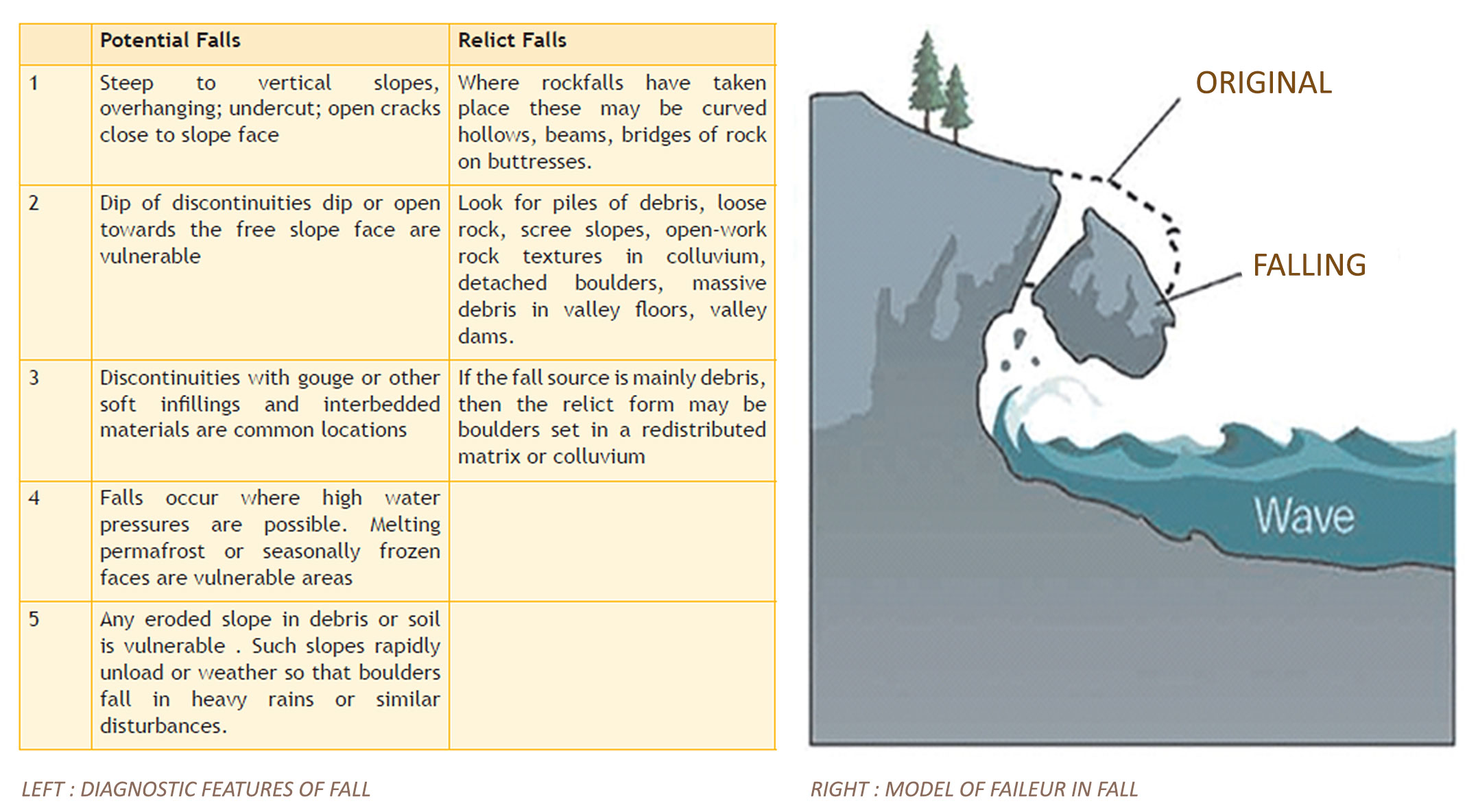 Topple : involves overturning of material. It is forward rotation of the slope mass about a point or axis below the centre of gravity of the displaced mass.

• The forward rotation out of the slope of a mass or rock about a point or axis below the centre of gravity of the displaced mass.
• Movement varies from extremely slow to extremely rapid.
• Driven by gravity and sometimes by water or ice in cracks in mass.

• Downslope movement of soil or mass occurring dominantly on surfacesof or on relatively thin zones of intense shear strain.
• The sign of ground movement are cracks of the original ground. 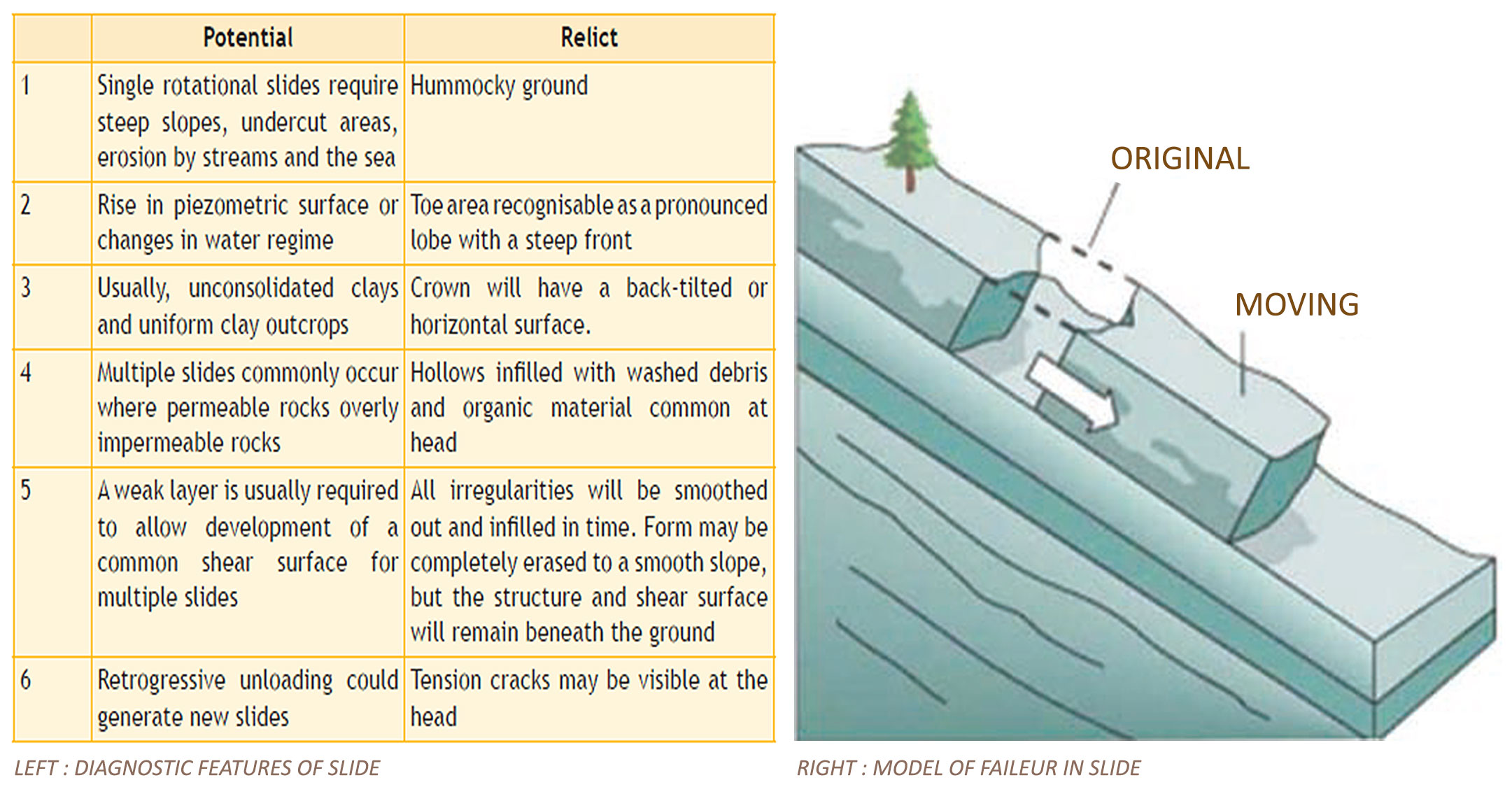 It is a type of rotational failure on slopes. The trees bend or fall backward on towards the slope.

E. FLOW
Flow: is a landslide in which the individual particles travel separatelywithin a moving mass

• Spatially continuous movement, in which surfaces of shear are shortlived, closely spaced and usually not preserved.
• Flows are differentiated from slides, on the basis of water content, mobility and evolution of movement.

Features for recognition of flows are:

i. Crown may have few cracks.
ii. The main scarp typically has serrated or funnel shaped upper part; is long and narrow, bare and commonly striated.
iii. Flanks are steep and irregular in the upper part; may have levees built up in the middle and lower parts.
iv. The body has flowlines, follow drainage ways, is sinuous, and is very long compared to width.
v. The toe spreads laterally in lobes; if dry, may have steep front. 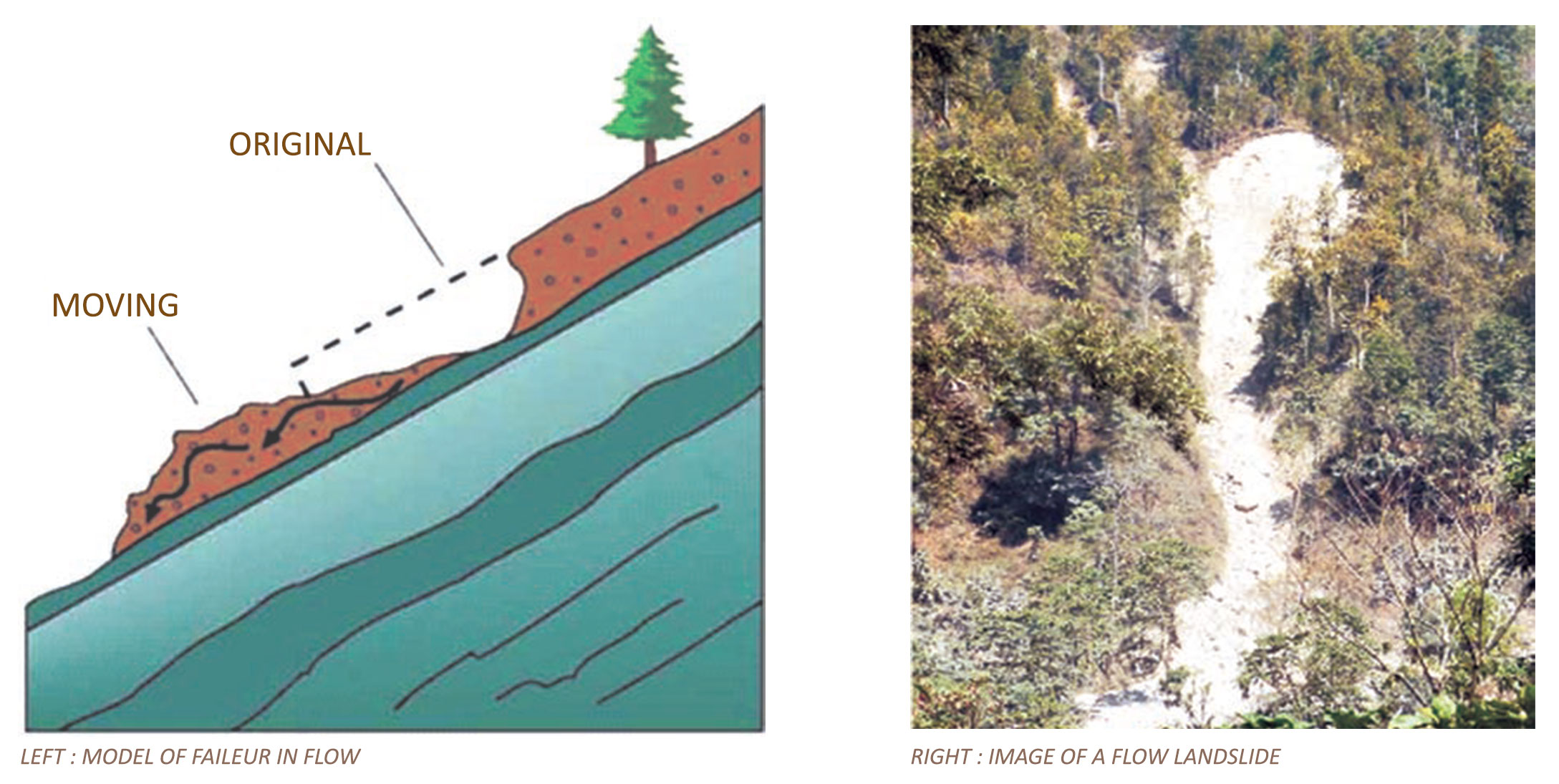 F. CREEP
Very slow rates of slope movements, usually a few millimeter per year, that is imperceptible in
nature) are covered under this category.

Those landslides where the nature of failure process is not consistent but changes with time. For example, a landslide that begins with rock sliding changes its nature to a rock-fall due to steepening of slopes during a failure, may again result into a debris flow due to formation of a channel during
the process of past failures.

Thus, it becomes, often very difficult to prevent and control such complex landslides. It requires a persistent study to understand the causes of such landslides properly. These landslides are also found to be chronic and recurring in nature. For example, Kaliasaur landslide in Alaknanda valley, Uttarakhand has displayed complex failure. 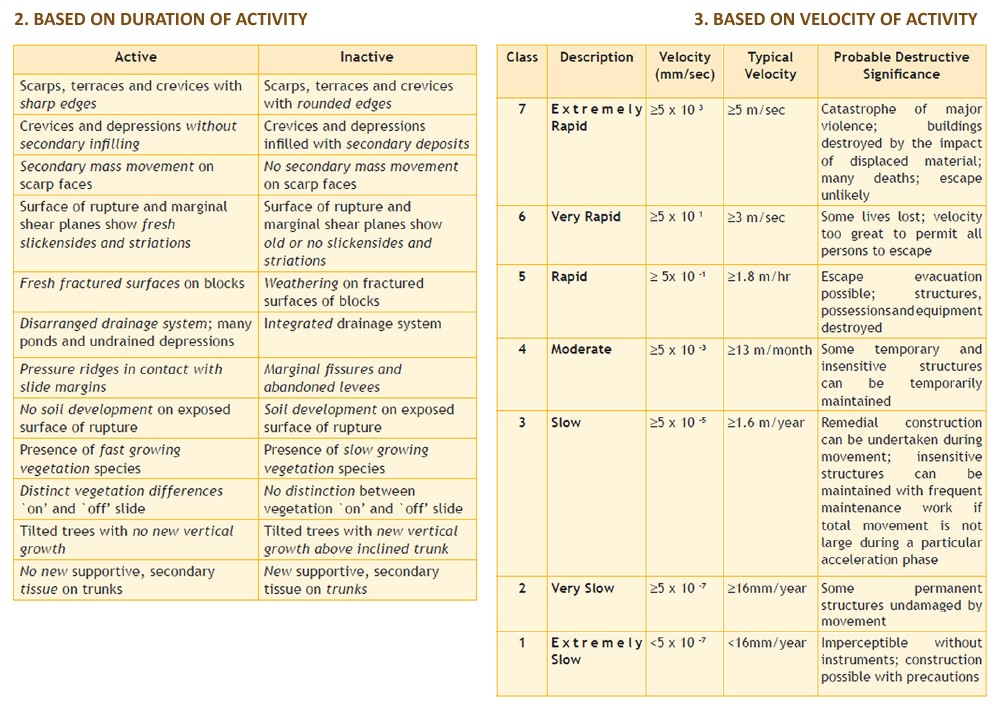 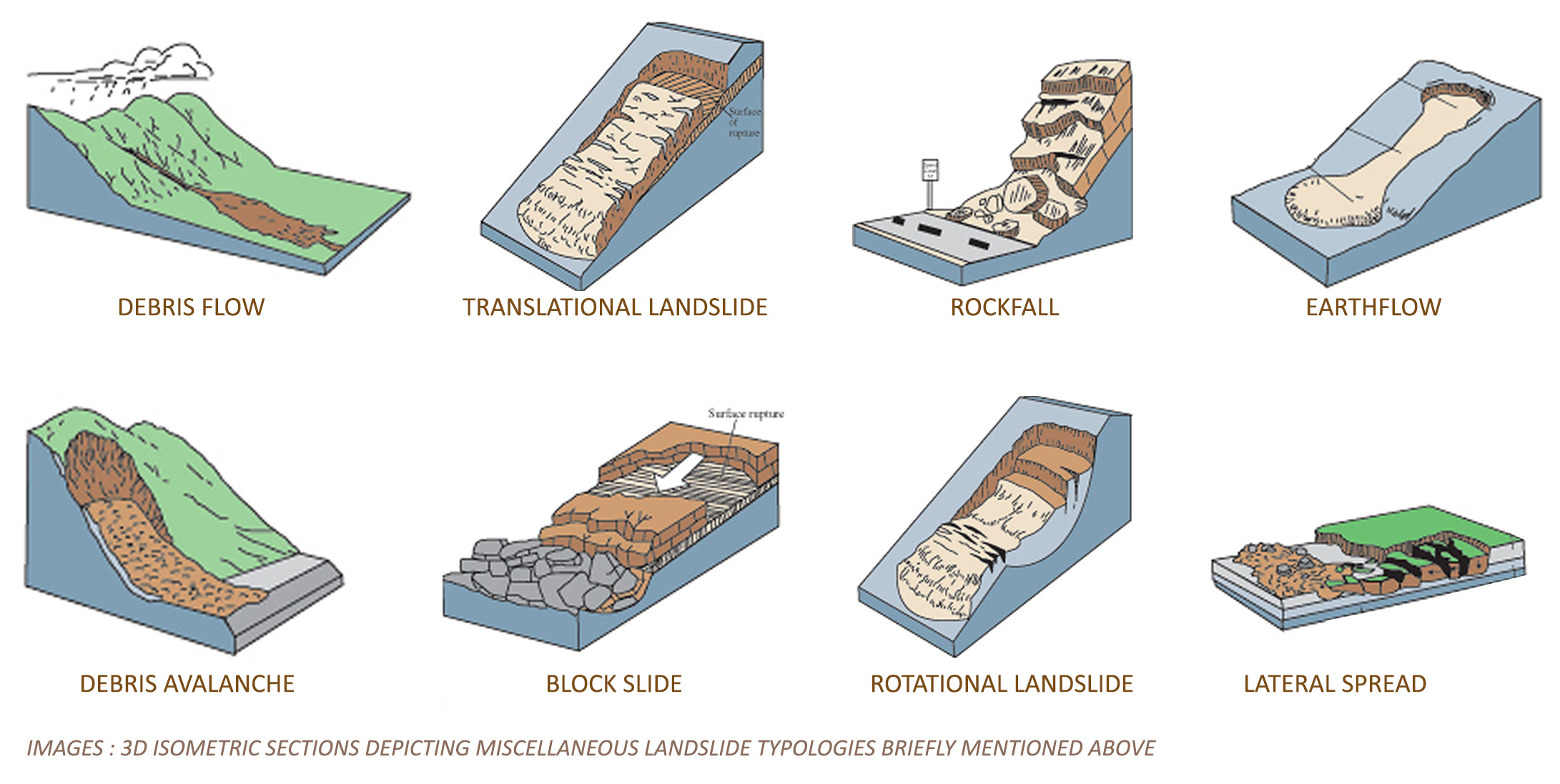 Some slopes are susceptible to landslides whereas others are not so. Many factors contribute to the instability of slopes but the main factors indicating stability conditions are relief, drainage, bedrock, regolith, vegetation, climate, earthquake, paleo-features and man-made conditions. The conditions/factors governing landslides can be classified as inherent (terrain) and external factors. 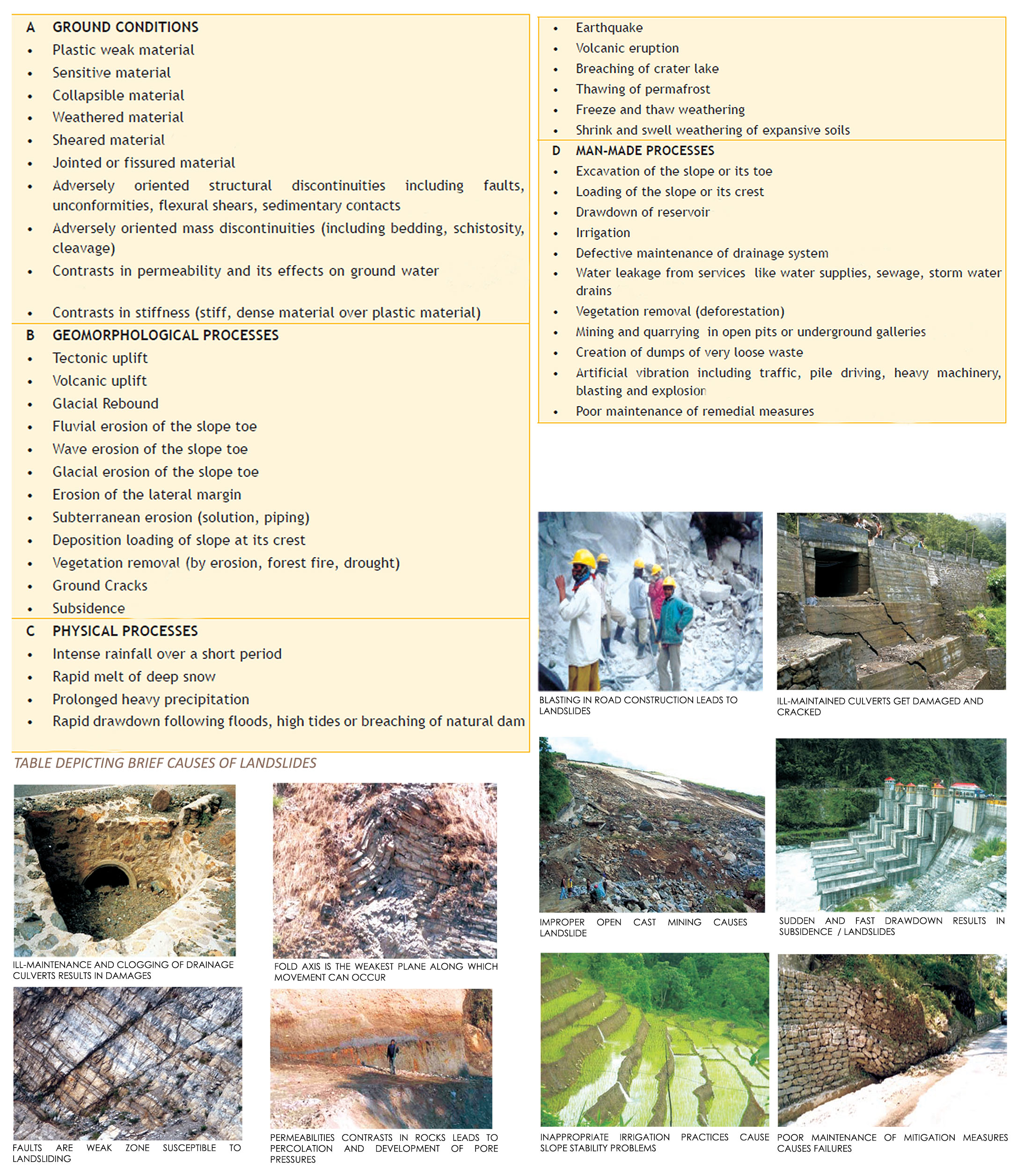 The identification and prediction of a landslide is essential to minimize or control the hazard. Usually this is done using costly procedures as surveying, monitoring or soil testing, which are not affordable or feasible in rural regions with almost no resources. Therefore, simpler but still effective methods have to be used to assess the stability of Slopes and decide if a given location is safe for construction. The following features may be used to identify probable landslide-prone areas.

 Existing or old landslides or places of historic landslides
 Areas at the base of slopes
 Within or at the base of minor drainage hollows
 At the base or top of a fill slope At the base or top of a cut slope
 Any sloping ground in an area known to have a landslide problem
 V-shaped valleys, canyon bottoms, and steep stream channels
 Fan shaped areas of sediments and boulders accumulation at the outlet of canyons
 Areas with large boulders (2 to 20 feet diameter) perched on soil near fans or adjacent to creeks
 Steep hill slopes above a home or hamlet
 Logjams instreams above a home or hamlet
 Steepened road cuts, sunken or down-dropped road beds
Areas that have been extensively disturbed by excavation into steep slopes
 Moderately steep slopes that are exposed to high water flow
 Burn areas, intensively irrigated agricultural field, canyon, hillside, mountain and other steep areas are vulnerable to landslides

As the world population grows, they are increasingly vulnerable to landslides. People tend move on to new lands that might have been deemed too hazardous in the past but are now the only areas that remain for the Growing population. Poor or non-existent landuse policies allow building and
other constructions to take place on the land that might better be leftto agriculture, parks or other such uses. Communities are not guarded to regulate unsafe buildings practices and may not have legitimate or adequate means / expertise to do so.

FOR DETAILED INSIGHT TO OUR LANDSCAPE PROJECTS, VISIT :